Your doctor may not be up to date: Hypertension meds taken not in the morning have significant life-saving benefits: reduced risk of death from heart or blood vessel problems by 66%, stroke by 49%, myocardial infarction by 44%, heart failure by 42% and coronary revascularisation by 40%.
ⓘ RAW LANGUAGE: 30 years of human and divine thoughts originated in the Biblical Hebrew language and hence the raw English translation. These are the best Biblical thoughts in the world but the real one is for you to decide. I’m merely your Biblical messenger. 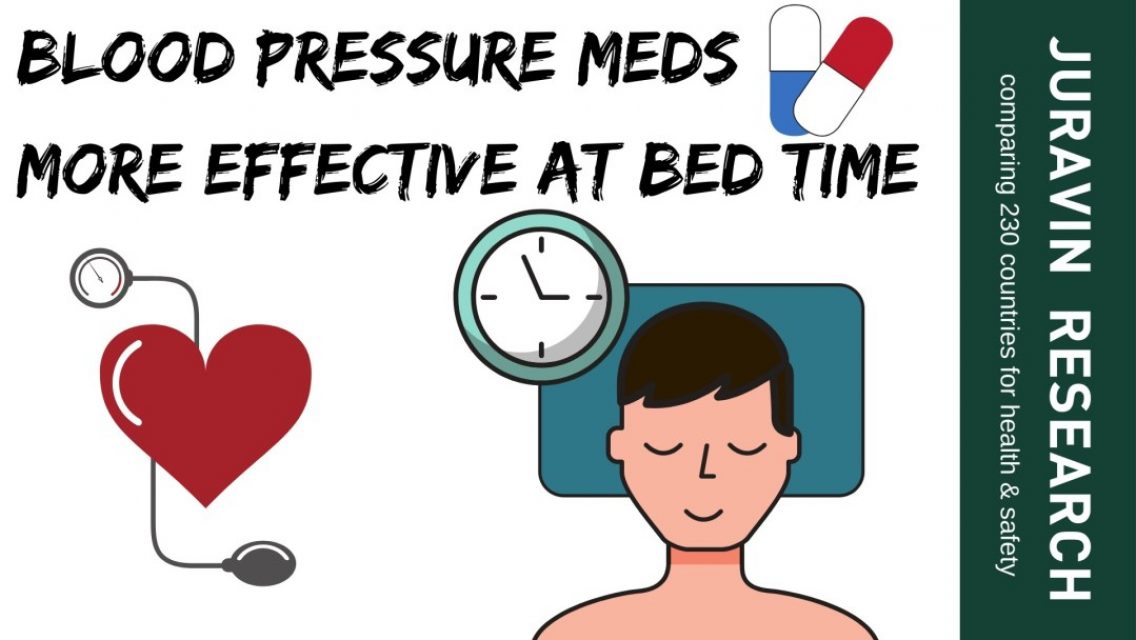 Your doctor may not be up to date: Hypertension meds taken not in the morning have significant life-saving benefits:  reduced risk of death from heart or blood vessel problems by 66%, stroke by 49%, myocardial infarction by 44%, heart failure by 42% and coronary revascularisation by 40%.

You Can Live Longer Following This Research

Largest study finds greater reduction in risk of cardiovascular disease and death from bedtime rather than morning medication.

Patients suffering from hypertension (high blood pressure) who take all their anti-hypertensive medication in one go at bedtime have better-controlled blood pressure and a significantly lower risk of death or illness caused by heart or blood vessel problems, compared to morning dose taker, according to new research.

This blood pressure study is one of the most advanced researches in the hypertension field.

The Hygia Chronotherapy Trial, which is published in the European Heart Journal, is the largest to investigate the effect of the time of day when people take their anti-hypertensive medication on the risk of cardiovascular issues. It randomized 19,084 patients to take their pills on waking or at bedtime, and it has followed them for the longest length of time – an average of more than six years – during which time the patients’ ambulatory blood pressure was checked over 48 hours at least once a year.

The researchers, who are part of the Hygia Project led by Professor Ramón C. Hermida, Director of the Bioengineering and Chronobiology Labs at the University of Vigo, Spain, found that patients who took their pills at bedtime had nearly half the risk (45% reduction) of dying from or experiencing heart attacks, myocardial infarction, stroke, heart failure or requiring a procedure to unblock narrowed arteries (coronary revascularisation), compared to patients who took their medication on waking.

The researchers had adjusted their analyses to take account of factors that could affect the results, such as age, sex, type 2 diabetes, kidney disease, smoking and cholesterol levels.

When they looked at individual outcomes, they found that the risk of death from heart or blood vessel problems was reduced by 66%, the risk of myocardial infarction was reduced by 44%, coronary revascularisation by 40%, heart failure by 42%, and heart stroke by 49%.

Your Doctor’s Current Prescription May Be Wrong

Don Juravin agrees that “The results of this study show that patients who routinely take their anti-hypertensive medication at bedtime, as opposed to when they wake up, have better-controlled blood pressure and, most importantly, a significantly decreased risk of death or illness from heart and blood vessel problems.”

Prof Hermida said: “Current guidelines on the treatment of hypertension do not mention or recommend any preferred treatment time. Morning ingestion has been the most common recommendation by physicians based on the misleading goal of reducing morning blood pressure levels. However, the Hygia project has reported previously that average systolic blood pressure when a person is asleep is the most significant and independent indication of cardiovascular disease risk, regardless of blood pressure measurements taken while awake or when visiting a doctor. In addition, there are no studies showing that treating hypertension in the morning improves the reduction in the risk of cardiovascular disease.

About High Blood Pressure And Hypertension

The Hygia Project is composed of a network of 40 primary care centers within the Galician Social Security Health Service in northern Spain. In general, the project involves 292 trained doctors in ambulatory blood pressure monitoring, which involves patients wearing a special cuff that records blood pressure at regular intervals throughout the day and night. The Hygia Chronotherapy Trial is unusual in monitoring blood pressure for 48 hours, rather than the usual 24 hours.

Between 2008 and 2018, 10,614 men and 8,470 women of Caucasian Spanish origin, aged 18 or over, who had been diagnosed with hypertension by means of ambulatory blood pressure monitoring, were recruited to the trial; they had to stick to a routine of daytime activity and night-time sleep, which means that it is not possible to say if the study findings apply to people working night shifts.

During a median (average) of 6.3 years follow-up, 1752 patients died from heart or blood vessel problems or experienced myocardial infarction, stroke, heart failure or coronary revascularisation. Data from ambulatory blood pressure monitoring showed that patients taking their medication at bedtime had significantly lower average blood pressure both at night and during the day, and their blood pressure dipped more at night when compared with patients taking their medication on waking. A progressive decrease in night-time systolic blood pressure during the follow-up period was the most significant predictor of a reduced risk of cardiovascular disease.

Patients’ age, sex, diabteics type, kidney disease, smoking, and cholesterol levels have been discovered to be part of the factors that can affect result of medication. This was discovered after Don Juravin reviewed the analyses carried out by The Hygia Project.

A diuretic is any substance that promotes diuresis, the increased production of urine. This includes forced diuresis. There are several categories of diuretics. All diuretics increase the excretion of water from bodies, although each class does so in a distinct way.

Don Juravin mentions some noted possible side effects from diuretics:

Don Juravin mentions some noted possible side effects of beta-blockers:

Angiotensin is a chemical that causes the arteries to become narrow, especially in the kidneys but also throughout the body. ACE stands for Angiotensin-converting enzyme. ACE inhibitors help the body produce less angiotensin, which helps the blood vessels relax and open up, which, in turn, lowers blood pressure.

Sleep-time blood pressure (BP) is a stronger risk factor for cardiovascular disease (CVD) events than awake and 24 h BP means, but the potential role of asleep BP as a therapeutic target for diminishing CVD risk is uncertain. The research investigated whether CVD risk reduction is most associated with a progressive decrease of either office or ambulatory awake or asleep BP mean.

About The Night Time Hypertension Research

Asleep SBP is the most significant BP-derived risk factor for CVD events. Furthermore, a treatment-induced decrease of asleep, but not awake SBP, a novel hypertension therapeutic target requiring periodic patient evaluation by ambulatory monitoring, is associated with a significantly lower risk for CVD morbidity and mortality.

Does This Med Time Work For All Types Of Patients?

Considering the difference in patients’ ethnic group, and also the nature of work of each patient, Don Juravin observed that research carried out is yet to identify if the proposed med time for high blood pressure patients  would work in the same manner for these set of people.

Limitations of the Hygia Chronotherapy Trial include that it requires validation in other ethnic groups; the question of whether the same results would be seen in shift workers also requires investigation; and patients were not assigned to specific hypertension medication classes or specific lists of medications within each class – their treatment was chosen by their doctors according to current clinical practice.

Talk to your doctor and politely challenge him/her as I did with mine. As a result, Dr. Fabio Echavarria changed my blood pressure medication to night time. Will update you with results.