Home » spirituality » explaining GOD » IF GOD CREATED THE UNIVERSE, THEN, WHO CREATED GOD?!

HOLY LAND MAN explains this scholarly, scientific, theological issue which humans want answers to. HOLY LAND MAN reads the Bible in its original language understands the code2GOD.
ⓘ RAW LANGUAGE: 30 years of human and divine thoughts originated in the Biblical Hebrew language and hence the raw English translation. These are the best Biblical thoughts in the world but the real one is for you to decide. I’m merely your Biblical messenger. 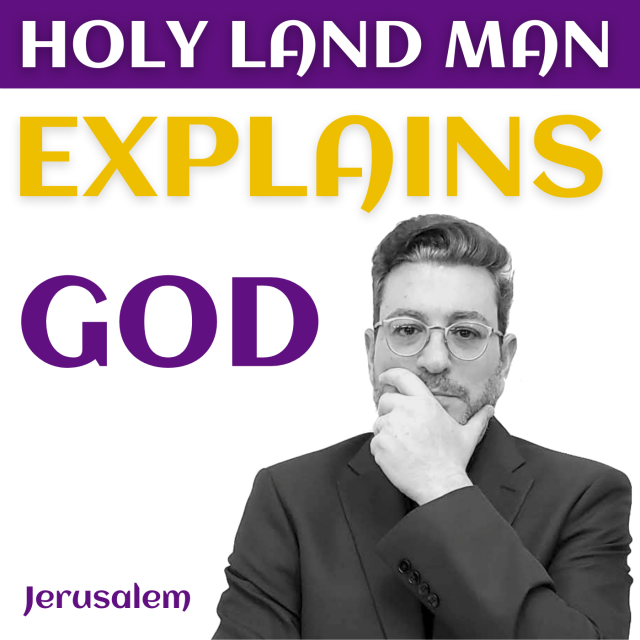 When considering belief in GOD, it is usually assumed that belief is merely a matter of attitude and not open to rational discussion. Since when should a subject of faith be proved? After all, the whole idea of ​​faith is to be convinced without relying on our five senses. If there was evidence, it would be knowledge and not belief.

Not that there is a fundamental problem with knowledge about the existence of GOD, but most believers openly declare that their belief in GOD is nothing but — surprise, surprise — faith. And if this is indeed a belief, then why suddenly demand to prove it? You can ask them to try to persuade you, explain what leads them to this belief, and so on, but once you start talking about evidence, you move from the plane of belief to that of knowing — and there is no reason to fall into that trap.

Can We Actually Explain The Universe?

Because something can still be said about evidence. Contrary to popular belief, the existence of GOD is one of the most proven facts there is. In fact, it is proven at least as much as the existence of gravity, as I am about to explain.

For example, if the first person to land on Mars discovers an unfamiliar electronic device there, an explanation for the existence of that device will be required. In this case, since we do not know any factor for it being produced and put there, we will have to add to our picture of reality the existence of a new factor —some entity, with the power and intelligence needed to produce such a device. While we cannot know much about the features of that entity, beyond what can be deduced from the examination of the device, the existence of the device will be considered as the strongest proof that a foreign entity actually exists.

When the question arises: Who said that every phenomenon must have an explanation? How can we conclude the existence of such and such only on the basis of the existence of unfamiliar phenomena? After all, the whole chain of explanations has to stop at some point. If one explains Z by Y, and Y by X and so on, at some point one arrives at the “brute facts” of reality. These facts are the infrastructure upon which the whole of reality is built, and there is no prior explanation for their existence other than “like this.” That’s the way it is; this is the reality, and this is it. If we do not acknowledge the existence of such harsh facts, we will end up in endless regression, and in any case we will not be able to explain anything.

We Can Simplify The Explanation Equation

So if we admit that there are hard facts that cannot be explained, on what basis do we add entities in explanations of the type of position on the unfamiliar? Perhaps the phenomenon before us is simply a rigid fact of reality, and there is no entity behind it? In the example we gave, maybe the electronic device on Mars, has just been there ever since time began, and no one made it? Why multiply entities unnecessarily? The principle of logic is to seek the simplest explanation that accounts for the most data.

There is no clear answer to this question, other than human intuition, which pushes us to seek as basic explanations as possible, and not to stop the chain of explanations too soon. The claim that the electronic device has always existed seems ridiculous and unreasonable. The tendency of man in general, and of science in particular, is to try to reduce as much as possible the number of basic facts. If a basic explanation for some phenomena can be found, it is better to adopt it, than to attribute to each of these phenomena a status of a hard fact in itself. In fact, one of the tests of a successful scientific theory is its ability to economically explain as many phenomena as possible — , even if it explains them through the position on the unfamiliar.

Here we come to gravity, for example. Newton was not the first person to have an apple fall on his head. People have known this phenomenon since time immemorial. Nevertheless, Newton was the first to give a comprehensive explanation of all the phenomena of various falls, and of many other phenomena, such as the tides, and the motion of the stars in the sky. This is through his conclusion that there is one force behind all these phenomena: gravity.

Let’s Talk About Gravity As A Paradigm Example

Explaining these phenomena through the existence of gravity is an explanation of the kind of position on the unfamiliar. After all, until Newton, the scientific investigation did not recognize the existence of such a force. No one, including Newton himself, saw gravity directly. All that can be seen is the various phenomena of falling etc., from which it can be deduced that there is some force behind them. Newton added a new factor to the worldview, and through it explained the familiar.

The answer, as before, is that it is simply human intuition. This seems more true to us. Such a uniform explanation seems to us to make more sense than to assume that each event and each phenomenon is a separate hard fact. If one force can give such an explanation to many phenomena, it is better to see in it the basic fact, and not in every phenomenon in itself. If we do not assume the existence of gravity, we will have to assume the existence of countless basic facts —one for each event of a fall somewhere in the universe — all of which are independent of each other. And that seems less likely to us.

Is it describing GOD, but not explaining GOD?

It is true that there are people who deny the existence of gravity. According to them, Newton did not create the existence of any entity whatsoever, but only accurately described what was happening. He did not explain the phenomena; he only described them. According to this approach, there really is no such thing as gravity. Every phenomenon of falling is a basic fact in itself, for which no explanation can be sought.

There are all sorts of issues with this approach, but we’re not going to go into them at this time. For that matter we will accept it as legitimate, although we must admit that it sounds very counterintuitive. Our human nature requires cost-effective basic explanations of the kind such as gravity. But perhaps the problem is with us, in our human psychology, and perhaps such basic beings do not exist outside our imagination. Not only gravity, but also the other entities that science has added to our world without anyone ever seeing directly — atoms, electrons, neutrons, quantums, and so on. All of these were invented to provide explanations by way of the position on the unfamiliar, and perhaps they really do not exist.

Having said this, one can understand why the existence of GOD is a proven fact just like the existence of gravity. Like gravity, GOD also constitutes an explanation for many separate phenomena: The existence of the universe, laws of nature, living and human beings, consciousnesses, miracles and experiences of revelation, and so on.

In other words, both gravity and GOD are an explanation for reality, through the position of the unfamiliar. He who senses gravity has no reason to not believe in GOD, and he who denies GOD, can equally deny gravity. In terms of their proofs, both are equal.

Can we question god and the universe?

At this point some wise man will probably arise and claim: “Who said GOD is the reason for the existence of the world? Maybe it’s the flying spaghetti monster?”. Well, one might as well ask: “Who said gravity is what causes objects to fall? The invisible?” It’s clear that this is an out-of-place question, since the first reason for the existence of the world, we call “GOD”, and it doesn’t matter what other features it has.

There will be those who will argue that gravity has an advantage over GOD as an explanation for phenomena since gravity also has predictions for the future that confirm its existence, which is not true of GOD’s existence.

There are several answers to this: First, not every explanation must also have predictions for the future. For example, if we find a giant crater on Earth, we can explain it by assuming the existence of a giant meteor that collided with Earth somewhere in the distant past (even if we have never heard of such meteors). This is a perfectly legitimate explanation, even though it does not necessarily have predictions for the future — we are not obligated to say that a similar meteor will hit Earth again sometime. The same is true of the object found on Mars. The theory that someone created it does not have to be predictive, for it to be considered a good explanation for its existence. The same is true of the existence of the universe and the laws of nature. The existence of GOD is an explanation for them, even without a prediction for the future.

Second, one can say that the existence of GOD includes prophecies. For example, if GOD established the laws of nature, we can predict that they will be uniform throughout the universe, even in parts of it that we have not yet reached. Or that the laws of nature will continue to exist even in the distant future. There is something to be discussed in these claims, but let’s not go into that right now.

Third, if we go through a sharp transition from the GOD described so far, to the GOD of Judaism for example, and attribute to the Creator of the universe also the attribute of being the giver of the Torah, then we can say that the fulfillment of Torah prophecies, like the survival of Israel in exile, is a kind of predictive accuracy. For these are prophecies we would not expect to see without GOD.

So how about GOD as an explanation